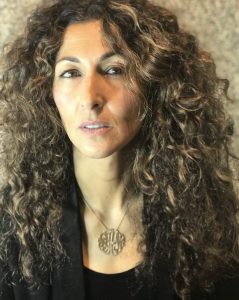 Sarra started her career quite early, at the age of 16, with Madame Camille Albane.

A year later, she began working at Dessanges under Bruno Pittini where she was able to learn impeccable technique and broaden her creativity.

At 19 she met Yannick d’Is, one of the precursors of studio hairstyle in the fascinating world of fashion.
Thanks to this encounter, she achieved excellence.
From then on, with her « mentor » she worked  alongside  photographers of renown such as Richard Avedon and Irving Penn.

After several shootings in the fashion capitals, Sarra settled in New York when she was 21, and began managing her own career. She joined one of the biggest  agencies for freelance hairstylist, and lived in Manhattan for 11 years.

During her carreer, Sarra has been working with the best of the best in the  fashion and art worlds. She has been sought after by well-known magazines as Vogue, Elle, Vanity Fair, Allure, Visionnaire, Harper’s Bazar…
She has collaborated with eminent photographers such as Patrick Demarchelier, Jean-Baptiste Mondino, Annie Leibovitz, Peter Lindberg…. Panthène, Avon, Sephora, Revlon, Givenchy, Barney’s etc…have called Sarra to collaborate on their advertising campaigns.
She has become as well  a familiar figure on the red carpet of Cannes Film Festival or the Oscars : some of her « customers »  were Scarlett Johansson, Sofia Coppola, Kate Hudson, and in the french cinema, Emmanuelle Seigner, Sophie Marceau, Carole Bouquet….

In 2005 Sarra came back to France and established herself in the south of France, in Aix-en-Provence. As a new mother of a little baby, she opened her own Studio where thanks to her savoir-faire she provided men and women with haircuts sur mesure.

At the same time, she continued to work on photo shoots with the actress Emmanuelle Seigner and pursued a side career as hairstylist on movie sets starting with Polanski’s Vénus à la fourrure, and then Marseille saison 2 with Gérard Depardieu, Benoit Magimel, Géraldine Pailhas, Natacha Reigner, Nadia Fares, to name a few of her very satisfied clients. She recently signed on to do some work with Emmanuelle Seigner for the French television TF1 Insoupconnable and with the french actor Benoit Magimel, Nous finirons ensemble.

Sarra Na excels at all hairdressing techniques with talent. Cutting technique, creation, and style are the words she abides by, but the first one is « l’art du cheveu ».